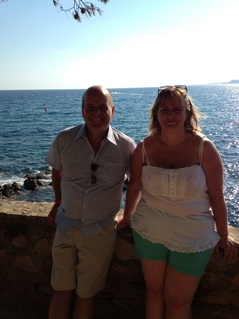 ﻿Ian Page
﻿
Ian was bought up in a family without dogs. He met his wife when he was 22.  He had always wanted a dog but he was allergic so he had some immunotherapy treatment which worked thankfully, which then lead to them getting their first dog. This happened a year after moving into their first home together.

They had always loved Dalmatians for their size and elegance.  When they bought Purdy home she was a complete horror but we grew to love her to bits and when we decided to have a litter it was purely as a friend for her.  Tigger stood out in that litter and although the family wished to have another puppy I felt she was the one.

Karen showed her the first time and from there Ian ended up showing her after that.  She could be a total madam but Ian travelled with her everywhere. Gaining a 3rdCC with a dog is something that you just cannot explain. So when Tigger became Winflash first Champion Ian got to experience what a lot of exhibitors had never got the chance to.  Despite Tigger passing, she will always have a special place in Ian heart and will remain an all time favourite.

Now days Ian is semi retired from showing as Charlotte is younger and fitter which makes her able to keep up with the dogs. However on the odd occasion Ian will step in to show Charlotte how it is done.