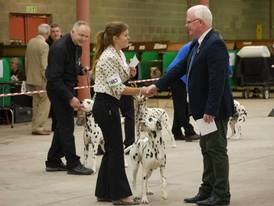 Charlotte is one of the Top Junior Handlers in the country!

After winning the title in 2010 under previous Top Junior Handlers Marina Scott and Lisa Moir, Charlotte has gone on to handle all of the Winflash team to some of the top awards within the country. Charlotte started showing at the age of 11 with her first show dog being CH Winflash Spring Angel SHCM. It was expected that Chloe would be a training dog for Charlotte to gain understanding and knowledge to compete in the JHA and YKC classes. It was only after competing in the breed classes that Chloe took her first CC, that Charlotte carried on showing her. Before her second birthday she was made into a Champion and from then on Chloe went from strength to strength.

Charlotte has since handled three out of the four champions at Winflash to there titles. She has also had numerous awards with the other Winflash dogs. As well as the showing side, Charlotte has graduated with a first class degree in Business Management and works within Marketing. She is an active committee member for East of England Championship Dog Show and North of England Dalmatian Club, a judge at B/C list level for the majority of the Hound and Utility breeds, a steward at Championship and Open show level and has published work within the dog press/publications. She also won the Shaun McApline - Outstanding Young Person of The Year Awards in 2016.